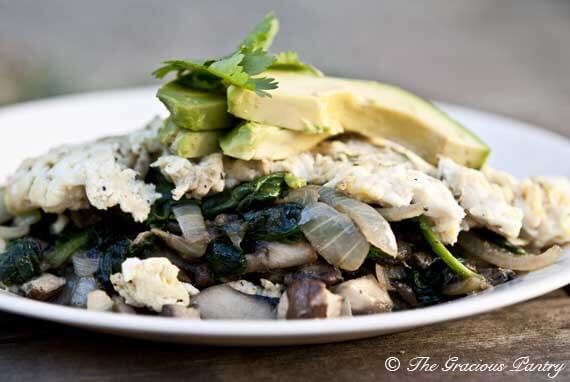 I don’t talk a lot about my husband on this blog. Mainly because this is a recipe blog, and he doesn’t do any of the cooking.

You see my husband is one of those guys who could burn water. He just never learned to cook. But there is one thing, and one thing only that he can cook that puts to shame anything I can do in the kitchen.

He makes the most amazing Omelets ever. I swear, there’s just nothing like them.

So after more than 6 years of marriage, I finally decided to take notes on what he was doing. I then tried it myself and did everything exactly the same way he did. It was definitely tasty, I’ll say that much. If it wasn’t, I wouldn’t be sharing it here. But his are still better. I swear he has some secret ingredient he’s keeping from me.

Some day I’ll catch him with it. Some day….

NOTE: If you want to use cheese, melt it in to the omelet before putting the veggies on. Also, if the fat and/or cholesterol are an issue for you, do this entire recipe with 8 egg whites instead.